A summer garden, the story behind a name and of course some new bears ......

It would appear that summer has arrived,  somewhat violently but the weather is warmer,  the evenings light until late and the garden is flourishing. The first day of June arrived with very strong winds which threatened my precious peonies and fuchsias but fortunately they are all still looking good.

Early last year I purchased seed potatoes and a grow bag from an offer in the newspaper. Included in the deal was a selection of garden plants. The potatoes were not a great success producing rather poor results but I planted the assorted flowers in various parts of the garden and did not give them much attention. I planted the foxgloves along the side garden wall after removing a hodge podge of overgrown shrubbery. This year they have finally started flowering and are a haven for the bees and actually look quite pretty. 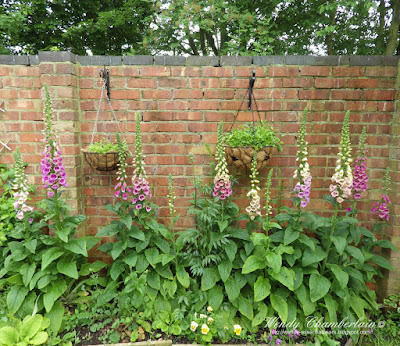 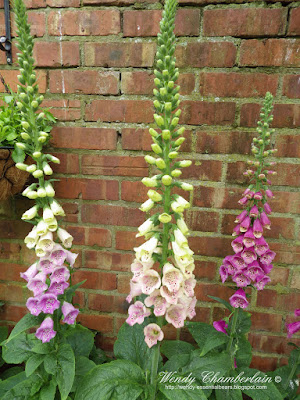 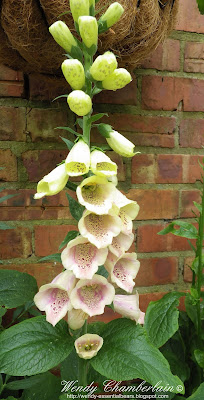 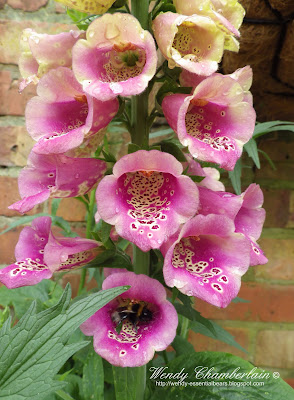 One little fluffy English bee in the last picture who was not impressed with my photographic endeavours and would not co-operate and keep still!  I confess to having an insatiable curiosity and wondered why they were called 'foxgloves'.  Did some Google research and discovered the most fascinating website on poisonous plants and discovered that - 'There are a number of explanations offered for the name 'foxglove'. It is said that it was originally named 'folk's love' meaning the fairies loved the way the flowers point downwards as it gives them a place to shelter. As home to the fairies, children were told it was bad luck to disturb the plant as this would lead to the fairies being homeless.  It is also said to come from 'fox glove' as the fairies gave the flowers to foxes to wear as gloves so as to leave no trace when raiding a hen house. This explanation was popular with people inclined to raid the rich man's hen house for themselves.'  Think I rather like thought of the foxes wearing flowers as gloves!

A Mother's Day gift some five years ago this beautiful Campanula has thrived in a pot and is a welcome splash of colour by the back door. 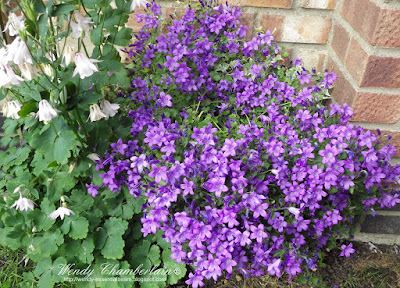 At the Hugglets show in February I came home with some new fabric including two pieces of random dyed rayon with co-ordinating linen for foot pads.  Rather faded and 'aged' looking I made two little 'handfuls', the first is Emily in shades of pink.  Her dress is made from the sleeve of a vintage christening gown which I dyed pale pink to match the fabric.  I used the sleeve edge for the top of the dress and added a band of embroidery around the hem. Unfortunately this fabric is extremely fragile and needed very careful handling. 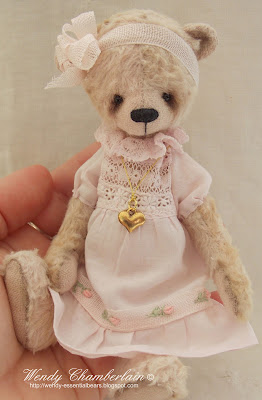 The second little girl I have just completed is in shades of blue.  Eloise is wearing a blue dress with crochet cardigan. I have used the same yarn to embroider her dress and made a selection of crochet flowers to trim her head. 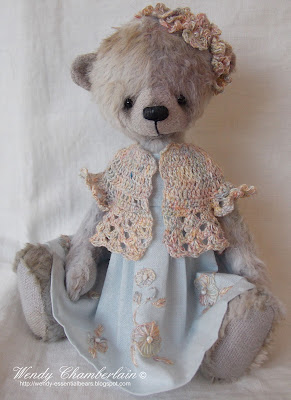 My husband's eye treatment appears to have been successful after a third injection.  A follow up visit in a month's time just to check progress and possible laser surgery later in the year.

The on line show 'Christmas in July' is next month,  finding it a little hard to feel creative to this theme in mid summer!  Really need to get busy stitching, hoping the ideas will start flowing soon.
Posted by Wendy & Megan Chamberlain at 9:01 PM 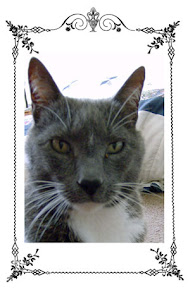 Be the change in the world

Wendy & Megan Chamberlain
United Kingdom
We have been designing and producing our individual creations under the Essential Bears label since 1992 specialising in miniature soft sculpture creations. We have a mailing list to advise all our collectors when new bears are available. Please e-mail dragonwyk@hotmail.com if you would like to be advised of updates.

I sometimes share pictures which have been gathered from various sources on the internet. If you hold copyright to any of the photographs please contact me and I will remove them from my blog.